Meet Te Herenga Waka—Victoria University of Wellington's alumni contacts across the US, including the University’s US engagement director.

Jessie has been based in Boston since 2006.  He currently works as a senior project specialist for Partners HealthCare. In addition to his Bachelor of Commerce from Te Herenga Waka—Victoria University of Wellington, Jessie also has an engineering degree from Mapúa University in Manila.

Find out more about Jessie on his LinkedIn profile, or take a look at the University's Boston alumni group on LinkedIn.

Kate has been based in the US for over a decade. She has worked in a number of different roles across various libraries and schools on the East Coast and is currently keeping busy with volunteering and substituting roles.  Kate completed her Bachelor of Arts in Classics at Randolph-Macon Woman's College in Virginia before undertaking her honours year at Te Herenga Waka—Victoria University of Wellington. She also spent two years undertaking research towards a Master of Arts which was focused on the poet Pindar. Kate also holds a Master of Information Science from the University of Michigan.

Find out more about Kate in her Q&A and connect via her LinkedIn profile.

Kevin has over 18 years’ experience working with technology for companies in New Zealand, Australia, and the US. Kevin is a project manager for the College of American Pathologists based in Chicago. In addition to his Bachelor of Commerce and Bachelor of Science from Te Herenga Waka—Victoria University of Wellington, Kevin also has an MBA from the University of Western Sydney. Find out more about Kevin and connect via his LinkedIn profile.

After completing his Bachelor of Commerce and Bachelor of Science at Te Herenga Waka—Victoria University of Wellington, Halvar then moved to the United States in 2005 to pursue a PhD in Physics at Harvard University. He taught in a variety of disciplines throughout his academic career, ranging from global health to management theory. After completing his graduate studies, he joined McKinsey & Company as a consultant in New York where he has now worked for over 8 years. His current role at McKinsey is Manager, People Analytics. Find out more about Halvar and connect via his LinkedIn profile.

Fleur first moved to the US in 2007 to join the prestigious US law firm Cravath, Swaine & Moore in New York City, after working for Kensington Swan in Auckland for several years. Following her admission to the NYC bar, she held the associate position for four years working on mergers and acquisitions, corporate advisory/investigations, and securities.

She then joined HBO as an in-house senior counsel, negotiating and drafting licensing and distribution agreements. In 2013, Fleur joined Google and has held a number of different roles. She is currently director, acting general counsel and compliance lead for Google Fiber, with responsibility for rolling out Google Fiber in states throughout the country.

Fleur is an enthusiastic and active supporter of New Zealand networks in the States, from the Kiwi Landing Pad, to KEA events and All Blacks matches.

Fleur completed a Bachelor of Laws and a Bachelor of Commerce at Te Herenga Waka—Victoria University of Wellington. She was a Weir House resident in her first year of study.

Find out more about Fleur on her LinkedIn profile, or take a look at the Bay Area alumni Facebook page.

Sara hails from the US but came to New Zealand to complete a Master of Science in Cross-cultural Psychology at Te Herenga Waka—Victoria University of Wellington in 2016. She completed her undergraduate degree in psychology at St Mary's College of Maryland.

Sara works as a program advisor for international internship and study abroad company Global Experiences Inc. based in Maryland and close to Washington, D.C.  She is an avid sailor and found New Zealand a great fit because it’s one of the few counties in the world where the sport of sailing is so celebrated.

Find out more about Sara in her Q&A, connect via LinkedIn, or check out the Washington, D.C. alumni group on LinkedIn. 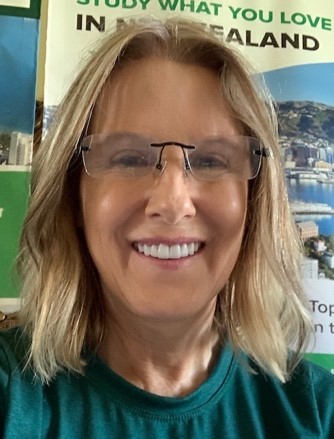 Fraka has significant experience in higher education having served as a Professor, Dean, Provost and Chief Academic Officer in the California State University system from 1985 to 2018. She has served on numerous committees including under the auspices of UNESCO, the Fulbright Commission, Public Broadcasting Service and the Council on Ocean Affairs, Science and Technology.

Since 2018, Fraka has served as our Director of Engagement in the U.S. and is keen to engage alumni and provide meaningful opportunities for volunteerism, service, and professional development.

“If you are interested in sharing your expertise, mentoring a student, supporting a student with their research, volunteering as an ambassador or giving financial support, please reach out to me.”

You can also help by letting people know about your personal journey at Victoria University of Wellington and the educational opportunities that exist at both the undergraduate and postgraduate level.

“We would love to have more USA students have the opportunity to study in Wellington.”

Find out more about Fraka and connect via LinkedIn.