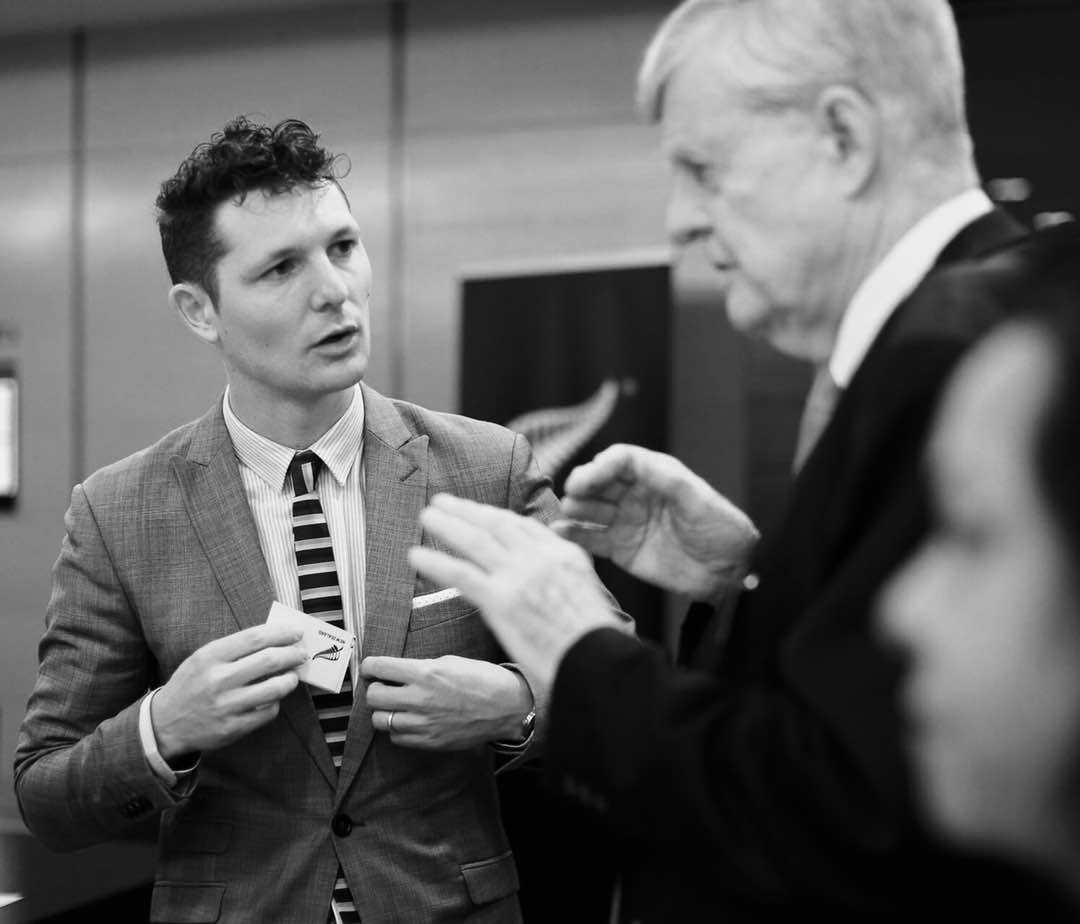 I was born in Timaru, raised in Christchurch and whakapapa to Ngāti Kahungunu ki te Wairoa, but now live in Wellington. A whānau visit to India when I was at high school led to an obsession with India and South Asia, and now I work at New Zealand’s leading Asia-focused organisation, Asia New Zealand Foundation Te Whītau Tūhono. My role is to build a network of entrepreneurs and business leaders across New Zealand and Southeast Asia and support the next generation of Kiwi leaders to grow as leaders and understand Asia.

I’m also a board member at Just Peoples, a charity that supports grassroots charities all around the world and I screw on bottle tops and stick on labels for Solid Oral Care, my wife Laura’s sustainable toothpaste company.

Why did you choose to study at Te Herenga Waka—Victoria University of Wellington?

I wanted to work with New Zealand’s leading expert on Bengal. After a bit of research it was obvious Sekhar Bandyopadhyay was that person and he was at Vic. The University also had a reputation for being the best place to study history in New Zealand.

You completed a Master of Arts in History. What’s your strongest memory of studying?

Hard work! One of the great things about post grad is getting an office and I pretty much moved into it. I also loved being a tutor. I love talking about history so a captive audience that had to listen to me was a dream. But seriously, the opportunity to teach was great and made me a better historian.

Sekhar was amazing. Such an inspiration and he always challenged me. I have a very vivid memory of an early meeting when I mentioned some American, Russian, and Kiwi scholars I was interested in and who were leading theorists on resistance. Sekhar challenged me to open my mind and explore the Indian scholars. I cringe when I think of it now, but it was a great lesson and introduced me to scholars like Partha Chatterjee, Tanika Sarkar, and Ranajit Guha.

Other than that, Vic was great at linking up the postgrad students with lecturers, and so meeting and listening to the big names in New Zealand history like James Belich and Charlotte Macdonald was a great privilege.

I don’t think anyone who does a history degree thinks about the job they will get afterwards. They shouldn’t anyway! I was mostly just hoping to get into something to do with international relations, especially in the public sector.

What do you wish you had known before applying for your first job?

Arts degrees teach you how to think, but not how to get a job. You are not on a defined path the same way you are if you do engineering or teaching or a trade. It’s both a strength and a weakness.

What have been your career highlights since graduating?

Travelling and representing New Zealand offshore is a pretty special thing to do—I’ve joined wider delegations to Malaysia and China, led over 10 delegations to places like Philippines, Thailand, and Indonesia and lived and worked in Ha Noi at the New Zealand Embassy in Vietnam. Organising a conference in Yangon, Myanmar was a bit of a highlight—mostly because it was such a challenge!

Tell us more about Asia New Zealand Foundation, and the work that you do.

In my mahi, many Kiwi entrepreneurs focus initially on exporting to Australia or the United States, not because they don’t see the opportunities in Asia but because they see it as incredibly daunting and don’t really know where to start. I’ve spent enough time in the region to understand how little I know, but I know enough to point people in the right direction and link them into a wider support network.

COVID-19 has significantly impacted many industry and sectors, with border closures, quarantine and isolation restrictions. What does this mean for an organisation whose remit is to provide New Zealanders with experiences to build their knowledge and confidence to thrive in Asia?

Asia will become even more important to New Zealand’s future because we’re likely to be able to engage with Asia earlier than some other parts of the world, and our geography hasn’t changed. Obviously, we can’t travel for the next little while, but we can—and have—been keeping the relationships we have in the region strong. This will help ensure that as much as possible when borders do open, those relationships won’t have fractured. Asia, like New Zealand, will be different post-COVID and it will be crucial we understand those changes.

How has what you learnt as a student helped you in your career?

And if you could say one thing to current Te Herenga Waka—Victoria University of Wellington students?

Make the most of it. Don’t be embarrassed to join a nerdy club, befriend someone new or volunteer for something. Mostly just ask questions.