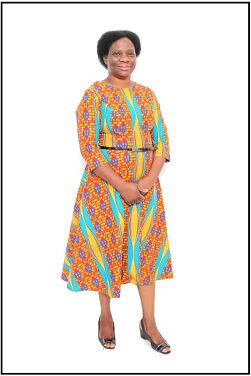 I was born and bred in Lusaka, Zambia. I am a judge of the Constitutional Court of Zambia, which is one of the two new courts established in 2016 following constitutional amendments. I was one of the first judges to be appointed to the new court in 2016. Prior to that I was a judge of the High Court for six years. Before joining the High Court bench, I used to work for the national regulatory authority for water supply and sanitation service providers (National Water Supply and Sanitation Council). I am married and have four children.

What did you study at Victoria University of Wellington?

I studied a Master of Laws majoring in administrative law.

Why did you choose to study in New Zealand and at Victoria University of Wellington?

At that time (2007) I wanted to do something in environmental law, and I saw that New Zealand was quite advanced in that area, in terms of environmental protection and issues of governance, particularly transparency, public participation, and access to information. However, I ended up majoring in administrative law.

Most of my colleagues were going to Europe and United States of America for their masters, but I felt that I needed to go elsewhere. Especially because I wanted to go with my family and New Zealand seemed to be a family friendly country. Fortunately for me at the time when I was applying to Victoria University of Wellington, I came across an advert by the New Zealand Government for the New Zealand Development Scholarships which was offering two scholarships for Zambia. I managed to get one of those slots as an unaccompanied student but I was able to come with my family. We had a good time! It was only the cold that we couldn’t get used to.

Have you always wanted to pursue the kind of career you have embarked on?

Growing up in Zambia I saw a number of issues, especially issues to do with empowerment for girls. Generally, you’d find that in most families, girls would just get married and not go far in their education. I wanted to show that as a girl you could do more, you could achieve something. Fortunately, my father was very firm on education for both girls and boys.

I chose to study law after seeing gender inequality issues in the community, and I wanted to at least represent the marginalised.
However, I didn’t get to do that kind of work, because when I completed my studies I went into the public service. At that time in Zambia, we had free education from primary right up to university. So, I thought ‘ok, the government has educated me, I should give to the public service’. And that’s how I joined the Ministry of Justice.

One of the biggest influences was Mr Oswald Chanda, the Director (CEO) at the regulatory authority where I was working at the time I came to New Zealand. He was young and visionary. His philosophy was that you can do anything you set your mind to do. He used to emphasise output and results, that you should leave an impact, even if you’re given a small task. This results-orientated approach has really helped me a lot.

Another influence was the late Chief Justice, Mrs Irene Mambilima (who unfortunately passed away in June 2021). You can imagine I’m one of the younger judges and among many of older judges, some of whom have been in the system way before I joined. But she showed confidence in me and gave me opportunity to chair the gender and training committees of the Judiciary. I am still the current chairperson of the training committee which leads and organises our in-service training agenda for both adjudicators across all courts and administrative and other staff. The gender committee has since gone on to establish, and is still rolling out, gender-based violence fast track courts that are now running and have been quite a success.

What have been some career highlights?

Of course the promotion to the Constitutional Court, which is one of the two apex courts in Zambia. I’d only been in the High Court for a few years when I was appointed to the Constitutional Court. I didn’t expect it, and all of a sudden I was thrust into it. This is a court that deals with issues that are also political in nature, such as elections and these have their own challenges as the losing parties are usually not happy or pleased.

Any particular moments throughout your career that are most memorable?

Shortly after returning from New Zealand, I was appointed as Acting Director of the National Water Supply and Sanitation Council. In my work at the regulatory institution, I was part of the team that established the Devolution Trust Fund. This provided funding to water supply service providers for the acceleration of the provision of water supply and sanitation services in peri-urban areas and unplanned settlements that had mushroomed across the country. Through the Devolution Trust Fund, water services were brought closer to the people, making life a little bit easier.

What advice would you give students/graduates wanting to pursue a similar profession?

When I was studying law, I thought I would be working on issues of protecting or fighting for gender issues and fighting for the marginalised, but then my career moved in a totally different direction! So, to law students I always say keep an open mind, talk to people and lawyers in different fields. Sometimes you’ll find that the field you didn’t think about, could all of a sudden be something you’d embrace and enjoy.

Also, networking is quite critical. Don’t keep to yourself. Try to get to those events. When I was at Victoria University of Wellington I’d go to events and try and meet somebody new, or someone I hadn’t talked to before to get inspired or encouraged.

Out of my four children, the youngest one was born in New Zealand while I was studying. So, it was like doing a double masters!