Comedian, TV host, and politics and international relations graduate Guy Williams tells us it’s luck, timing and hard work that has got him to where he is today 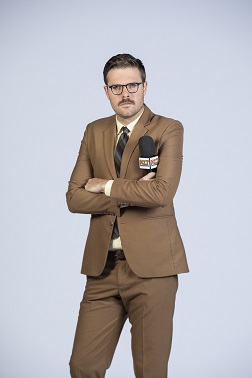 I’m just a humble man, using his unbelievable god-given gifts, to become the greatest entertainer the world has ever seen.

What did you study and why did you choose your degree?

Honestly, there was an exciting general election the year before I started, featuring Helen Clark vs Don Brash, and I enjoyed that so much I signed up for politics! I think a lot of 18-year-olds make choices based on TV—Legal dramas: lawyers, CSI: criminology, Ice Road Truckers: Ice road trucking.

What appealed to you about Te Herenga Waka—Victoria University of Wellington?

All the people I didn’t like from high school were heading down south so I wanted to go in the opposite direction! I loved Wellington. The city and Vic had a great student culture that kinda mixed with Cuba street and the arty scene. Not many uni’s in New Zealand are also in places I actually want to be! The marketing picture for Vic Uni should just be a big picture of the Te Papa squid and a quote from me “Admission: Free. Memories: Priceless”

There was no plan! I want to make it abundantly clear how lucky I was. I was pretty screwed but luckily the New Zealand comedy boom started as soon as I graduated and I was incredibly lucky to be able to make a living in comedy almost straight away.

Have you always wanted to pursue the kind of career you have embarked on? If so, when and how did you realise?

The constant embarrassment of being alive. Life is weird! It inspires comedy I reckon.

Have you faced any challenges along the way?

Almost none! People say “In life nothing is given to you” but for me almost everything has been given. Sorry there’s no lesson here but I think it’s important to point out that some people just kind of fail upwards.

I do work pretty hard, I guess that’s the lesson. Work hard, listen, and don’t be a dick. That’s a good start for a lot of jobs I reckon.

Don’t be an asshole. I haven’t really stuck to this. I used to enjoy being an asshole, but social media and Donald Trump has taught me that for the world to survive we need to cut back on the dickheadery. Most challenges the world faces these days (COVID-19, climate change, racism, poverty, unfettered corporate and state power) require us to work together! Being somewhat nice and biting your tongue occasionally is the lubricant that helps society run I reckon.

There’s no time to be a dick, we’re all going to die.

If you could say one thing to current students?

What do you want to do next with your career?

What more can I possibly do? The hardest thing when you’re at the top of your game is that…

In all seriousness, I hope people realise that the hubris is a joke. My dream is to keep working and hopefully do exciting and fulfilling work.

I wasn’t very cool at university. And now I’m one of the coolest men in the world. Anything is possible.

There’s nothing very surprising about me but I think a lot of Kiwi’s are surprised when they realise that that Māori are 15 percent of the population and over 50 percent of the prison population. Crime and punishment (stuff.co.nz). You uni nerds need to fix that.