Islands have played a major role in the development of both ecological and evolutionary theory.  Because islands house fewer species than the mainland, they provide a clearer view of the evolutionary and ecological ‘rules’ that govern community assembly.

We have been censusing plant communities on small islands off the Wellington coast since 2002 to document species turnover - the successive colonisation and extinction of plant populations. Armed with an understanding of the long-term dynamics of island plant communities we will test whether islands show repeated patterns in community structure, or whether they vary through time and space by chance.

Epiphytes and mistletoes are plants that inhabit isolated host trees, which function effectively as islands. Using a network-based approach we are again trying to identify community assembly rules in these ‘virtual’ islands. 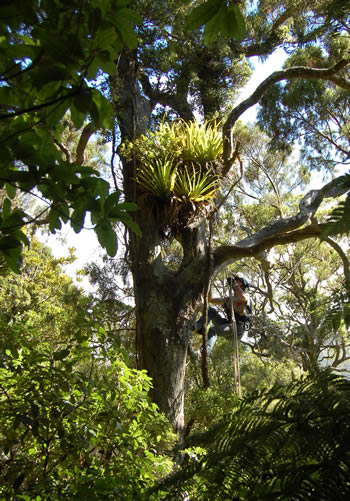 New Zealand is surrounded by a large number of offshore islands – the Chathams, Kermadecs and Three Kings for examplee –  which host plant species that are closely related to those found on the New Zealand ‘mainland’. Evolutionary biologists have long noticed that animals rapidly evolve body size differences on isolated islands and have termed the phenomenon the ‘island rule’.

We are testing whether plant follow the island rule, by comparing the size of seeds, leaves and stems between islands and the mainland. In addition to visiting offshore islands, for this work we have relied heavily on the extensive collection of offshore island plants at Otari-Wilton’s Bush, begun by eminent botanist Dr Leonard Cockayne in 1926.

One of the most important unresolved issues in science is to identify what separates the human intellect from the rest of the animal kingdom. Are our cognitive abilities completely unparalleled? In collaboration with Dr Rachael Shaw, we are attempting to answer this question with experiments on the New Zealand robin.

The New Zealand robin often caches prey high up in tree branches – remembering the location and number of prey in each cache for later consumption. Although their food hoarding behaviour may seem inconsequential, experiments on food hoarding animals in the Northern Hemisphere have played a pivotal role in what we know about how animals think, and inferentially, what makes how we think unique.

Robins evolved in the absence of large predators, so they are completely fearless of humans. Wild birds can therefore be fed by hand and will readily participate in a wide range of experiments that probe their limits of their intellects.

Our recent work has shown that robins have the best numerical sense of any untrained animal – outperforming even children, chimps and gorillas. In one of our experiments, robins were shown two prey items being placed in a drilled-out chamber in a tree branch. However, the first was hidden under a trapdoor, leaving only one remaining for the robin to locate. After failing to recover the exact number of prey they saw us place in the chamber, the robins basically ‘freaked-out’, suggesting they remembered how many items were meant to be there.

All but two species of New Zealand songbirds are non-migratory. The majority of forest birds, therefore, have evolved a ‘Swiss Army knife’ approach to acquiring food resources and switch between different types of available food resources - including insects, flowers and fruits - throughout the year. In 2005, I began bi-weekly foraging observations of New Zealand birds in the Karori Sanctuary to investigate:

New Zealand plants produce a striking diversity of leaf, flower and fruit phenotypes. Using a variety of scientific techniques, we are seeking an explanation for phenotypic in the size, shape and colour of New Zealand plants, to help shed light on the evolution of plant form and function in general.

New Zealand’s flora shares several distinctive attributes with other isolated islands. Heteroblasty for instance, the sudden, striking change in the size, shape and colour of some plants during development - is unusually common in New Zealand, New Caledonia and Hawaii. A common feature of these islands is that they once housed browsing birds instead of herbivorous mammals.  We are currently testing whether several unique aspects of the New Zealand flora might be adaptations to deter moa, giant, flightless birds that were once New Zealand’s dominant herbivores.

The fruits of many animal-dispersed plants in New Zealand are small, unobtrusive and strangely opaque. Weta are a group of giant, flightless crickets that are known locally as New Zealand’s ‘invertebrate mice’, because they perform similar ecological functions to small mammals elsewhere in the world. Our previous work has shown that they form mutualistic partnerships with fleshy-fruited plants similar to those forged between plants and small mammals on continents. We are therefore testing whether the unusual attributes of New Zealand fruits are adaptations to night time fruit-eaters – weta and reptiles.

Ontogenetic changes in leaf morphology (ie: heteroblasty) in Senecio lautus. The youngest leaf is at right and the oldest is at left (pictured).