Professor Anne Goulding is focused on advocating for libraries and the important role they play in New Zealand communities.

Whether you use one regularly, occasionally, or hardly at all you likely agree that public libraries are important. Even so, they don’t always get the recognition and support they need. Dr Anne Goulding, Professor of Library and Information Management at the Wellington School of Business and Government, is passionate about the work they do and, through her research, hopes to convince policymakers to utilise them to their full potential.

“I think public libraries are not tapped into as much as they could be” says Professor Goulding. “They support a whole range of policy agendas and I think they could play a bigger part. I want to show people the capacity they have to contribute to a whole range of policy agendas on education, literacy, digital citizenship, and community development.”

With the advent of the information age the role of libraries and librarians has changed significantly—moving from a transactional model (where people come to a library simply to check out a book) to a programmatic model (facilitating programmes and activities).

“There’s so much more consultation with the community around what they want their library to be,” says Professor Goulding. “You don’t go into a library anymore and the librarian tells you to shush—I think it always was a stereotype but it’s even more of a past stereotype now—libraries and librarians are much more about engagement.”

While librarians have been quick to adapt, playing a bigger role in helping people improve their literacy and become digital citizens, they aren’t always resourced to provide the services expected of them.

“That’s an issue with the organisation of libraries on a council level,” says Professor Goulding.  “If you look at the libraries here in New Zealand you have councils like Auckland with Auckland Libraries which is the largest library system in Australasia. The resources Auckland Libraries have compared to a district council that’s got two libraries is like chalk and cheese. There has been talk about a national library service, but that’s difficult because councils are very protective. But nationalisation has been achieved in Ireland, and that might be a model that New Zealand could look at.”

Other issues facing libraries including charges and fees (which can be a barrier to access), making sure libraries are inclusive environments, and libraries not evaluating their impact in the best way possible.

“Libraries measure their circulation which is important because it’s vital to know how much they are being used, but it doesn't say anything about the value of that use,” says Professor Goulding.  “It is really difficult to measure that value as it involves more qualitative methods which are expensive and time consuming. I also think people question them a little bit—policymakers and councillors are used to seeing facts and figures.

“I think there's a job to do in educating the fund holders about different methods of evaluation. I think we need to focus on outcomes for individuals—it’s even more difficult when you're talking about the impact on society— but you can talk about outcomes for individuals and how it has contributed to their wellbeing. I think if we can use stories to illustrate statistical data it adds a human face and libraries are all about people,” she says.

While there are issues to be addressed, New Zealand libraries are doing many things well, says Professor Goulding.

“They do a great job of reaching out to their community—really trying to find out what the community want, need, and desire. There's been quite a lot of work going on to make sure they are providing the services that suit their community,” says Professor Goulding.

“They are also great at collaborating. There are all these separate little libraries, but they do collaborate a lot.”

Going forward, Professor Goulding believes the role of libraries (both as a service and the facilities themselves) is going to continue to grow.

“Our lives are increasingly compartmentalized and there's been a huge increase in the number of one-person households—having a space like a library, where people can just be in other people's company is important.

“On the other hand, if you live in a really crowded household, it's a place you can go and just sit and be on your own. Although we talk about libraries being a space for activities, initiatives, and programmes, there is still a role for them to be for quiet.  That's a difficult balance to strike, but it is an important one,” she says. 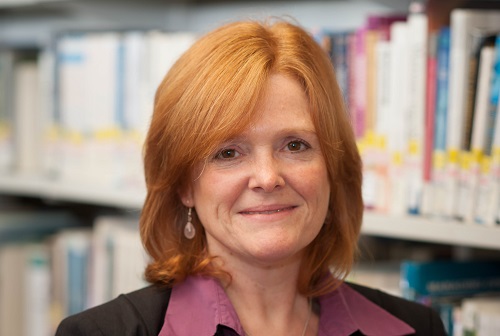 Professor in Library and Info Mngment
School of Information Management