A modern take on an ancient tradition

Kiwis commonly embark on an 'OE' after finishing their studies and Israelis do a long trip after military service, but there is no other form of youth travel quite like Wanderschaft in Germany. 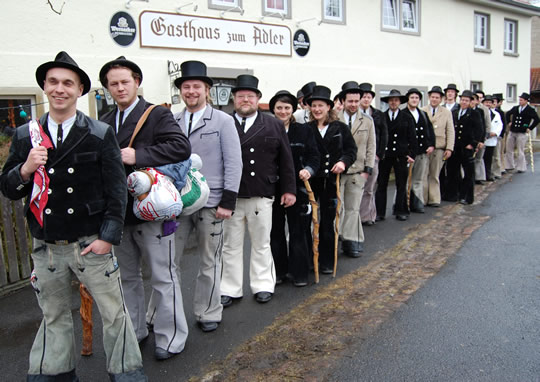 Kiwis commonly embark on an 'OE' after finishing their studies and Israelis do a long trip after military service, but there is no other form of youth travel quite like Wanderschaft, a centuries-old tradition of young German tradespeople working and travelling away from home.

Dr Christian Schott, a senior lecturer in Tourism at the School of Management, received a three-month scholarship earlier this year from the Deutscher Akademischer Austausch Dienst (German Academic Exchange Service), to conduct a mobilities research project examining how the Wanderschaft tradition has managed to survive in a rapidly changing and globalised world.

Wanderschaft originated prior to the 17th century, and involves young German tradespeople leaving their everyday lives for at least three years and one day, in their quest to become master tradespeople.

Rules stipulate that they must not be within 50 kilometres of their home during this time, and they are not permitted to work more than three months in any one place.

They are also required to live a simple life, carrying few belongings, walking or hitch-hiking, and staying with people they meet along the way or sleeping outdoors.

Practitioners are easily identifiable by their traditional outfits, which include a black jacket, hat and a walking stick a look that has remained unchanged for at least 100 years all but one of the associations upholding this longstanding tradition also outlaw the use of mobile phones.

"These days the Wanderschaft is an option after an apprenticeship has been completed, and there are still a small number of people taking it up," says Dr Schott.

"Since the 50s they have started travelling beyond Germany, some even making it to New Zealand.” "

The practice was forbidden during the Nazi era and in East Germany under socialist rule, Dr Schott says, but continued underground. After the East and West reunited, a number of East Germans took up Wanderschaft as a response to unemployment.

"Economic crises have always helped the practice survive. The greater the unemployment the more it happens."

Dr Schott says Wanderschaft has always been a rite of passage that is a combination of skill and personal development.

"It helps young people to become adults, as well as teaching them how to survive on a shoestring."

Traditionally, it was a male domain, but Dr Schott says females are now taking part too.

"It's hard to put a finger on what makes young people want to do it. Many of them feel they haven’t seen a full life yet, and that there’s got to be more to life than simply doing an apprenticeship, staying in the same town they were born in, and getting a job."

He says because the phenomenon is focused on upholding traditions, it is quite different than other long-term travel experiences many young people undertake today, such as an OE or a gap year.

"It's a very free life. Quite a few end up doing four or five years, and some never quite make it back."

Dr Schott says he encountered a darker side to the experience.

"Alcohol has always been an important part of the Wanderschaft and its associated rituals. While many of the young people manage it well and end up drinking less as the years pass, some struggle to get on top of the frequent availability of alcohol and just carry on living life on the road."

Reintegration into everyday life after being away also has its challenges.

"Suddenly re-entering society, there’s structure, expectations, planning and responsibility. One person told me that truly coming home takes as long as you’ve been away."

Dr Schott presented his preliminary findings at a Mobilities conference in Wellington in July and plans to write a paper on the subject.