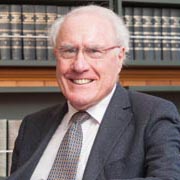 On leaving politics in 1990 he was a law professor at the University of Iowa and the Victoria University of Wellington. In 1994 he became a Foundation Partner of Chen & Palmer Public Law Specialists where he remained until 2005 when he was appointed President of the Law Commission, a position he occupied until 2010.  During that period he also chaired the Legislation Advisory Committee. He has appeared extensively in the superior courts including the Privy Council.

In 2010 and 2011 he chaired the Panel of Inquiry on the 31 May 2010 Flotilla Incident for the United Nations in New York that reported to the Secretary-General. For eight years he was New Zealand's Commissioner to the International Whaling Commission. He has a  list of  more than 1105 publications in legal periodicals and chapters in books that can be accessed on the Social Science Research Network.

He is also the author or co-author of twelve books, including Reform – a Memoir published by the Te Herenga Waka University Press in November 2013.  These include a teaching text on international environmental law with an American scholar that is in its fourth edition.  He has taught courses on climate change and the law and public law in Wellington. In March 2015 he delivered the Scarman lecture at the Middle Temple in London entitled “The Law Reform Enterprise: Evaluating the Past and Charting the Future” that appeared in the Law Quarterly Review in July 2015.

In 2016 he published with Andrew Butler A Constitution for Aotearoa New Zealand (Te Herenga Waka University Press) and public submissions have been taken on it. The proposed entrenched Bill of Rights includes an environmental right.

In 2018 he published with Andrew Butler Towards Democratic Renewal that revised the proposals contained in the 2016 book taking into account public feedback.

Palmer  served as a member of the Government Inquiry into Operation Burnham that concerned the conduct of New Zealand military forces in Afghanistan and reported in 2020. The inquiry lasted more than two years.

He continues to publish regularly in law journals and teaches at the Law School. He is writing a book with his grand daughter on how the New Zealand government works aimed at improving the level of civics education in New Zealand.