New Zealand's only surviving Chinese printing types, for use in a traditional printing press, will be the crown jewel of a new Chinese Scholars' Studio.

New Zealand's only surviving original Chinese printing types, for use in a traditional printing press, will be the jewel in the crown of a new Chinese Scholars' Studio at Victoria University of Wellington's Wai-te-ata Press after they were unearthed from a farmer's field in Pukekohe. 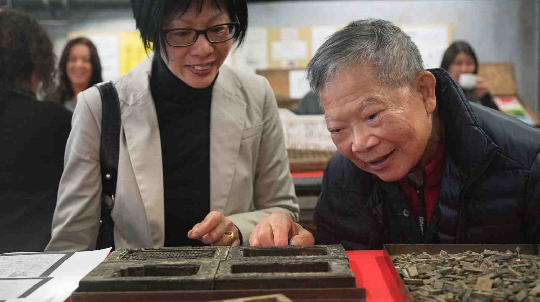 Victoria and the Dominion Federation of New Zealand Chinese Commercial Growers unveiled the Chinese Growers Printing Collection on Thursday 15 September as part of Chinese Language Week. The event began with a lion dance performance and an introduction by Dr Sydney Shep of Wai-te-ata Press.

At the event the project between Victoria and the Dominion Federation of New Zealand Chinese Commercial Growers was officially launched, and the agreement signed. The agreement marks the formal start of the relationship and the transfer of guardianship of New Zealand’s only surviving Chinese language printing typeface collection to Victoria.

The printing collection holds significant cultural history for the Chinese community and was used by the Dominion Federation of New Zealand Chinese Commercial Growers to print its monthly newsletters from 1952-1972. The print collection will now be restored, revitalised and rehoused at Victoria’s Wai-te-ata Press.

The event also marked the beginning of the new Chinese Scholars’ Studio at Victoria which will provide an exciting space to showcase unique Chinese New Zealand initiatives in Wellington. Opening in 2017, the Chinese Scholars’ Studio will showcase unique Chinese-New Zealand initiatives, giving the Chinese community an opportunity to use the restored printing types for small print runs.

Dr Sydney Shep of Wai-te-ata Press says: “Repatriating these unique types back to Wellington and putting them back into action offers an unprecedented opportunity for Victoria to help link past with present, language with culture, scholars with communities, and to catalyze new interest in the complexities of Chinese print history and its New Zealand stories.”

A display of the printing types is currently on view at Wai-te-ata Press, Level 0, Rankine Brown Library, Kelburn.