The first ever bilingual edition of 25 Best New Zealand Poems was launched on 15 March 2016 at Victoria University's Wai-te-ata Press.

The first ever bilingual edition of the 25 Best New Zealand Poems 2014 was launched on 15 March 2016 at Victoria University's Wai-te-ata Press. The book is a collaboration among four parts of the University – The International Institute of Modern Letters (IIML) whose selection of the twenty five best New Zealand poems is a celebrated annual event, the New Zealand Centre for Literary Translation (NZCLT) which pioneers new translations, Wai-te-ata Press which published the new book, and the Confucius Institute which sponsored the Chinese translation. This bilingual poetry selection is the first such translation of contemporary New Zealand poetry into Chinese. 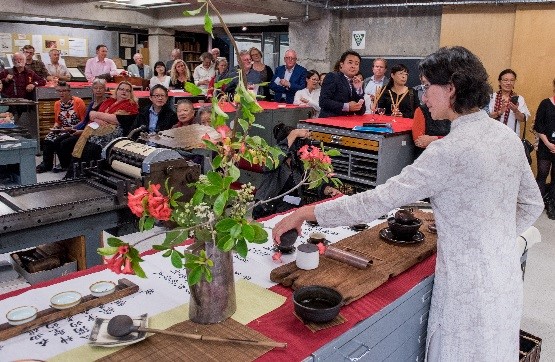 At the beautifully staged launch event hosted by Dr Sydney Shep of Wai-te-ata Press, the book was introduced with a tea ceremony and calligraphy. Poet-translator Liang Yujing explained how he entered the unique world of each poem before beginning his translation. Designer Ya-Wen Ho, herself a poet, described her search for a cover image among the Chinese punctuation marks used in the translated texts. Poets Marty Smith, Helen Rickerby and Dinah Hawken read their poems together with Yujing and Ya-Wen, and a multilingual rendition of Peter Bland’s ‘Locality’ was performed by Chris Price of IIML and Chinese colleagues. Dr Luo Hui, NZCLT Co-Director and project creator, and Professor Damien Wilkins, IIML Director, spoke of the important role of this special volume of poetry in encouraging understanding and appreciation among Chinese readers of New Zealand creative writing.