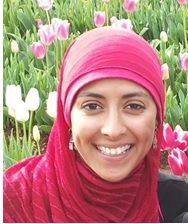 My Master's research is in "The moderational effects of faith-based coping methods on the relationship between acculturative life stressors and wellbeing in NZ Muslims."

My research interests include: