View a selection of books, monographs, and reports associated with the New Zealand Journal of Public and International Law.

We, The People(s): Participation in Governance 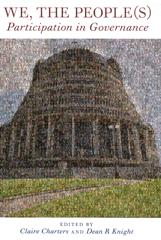 “We the people”, the opening phrase of the preamble of the United States Constitution, reflects what was then a revolutionary concept—that power comes from the people. It is participation by the people(s) that justifies, at least partially, the continuing exercise of governmental authority over them.

New Zealand's system of government is ideal for examining the participation of the people(s) in governance due to its Westminster origins, small size, accessibility of government, absence of an upper house, MMP electoral system, busy legislative programme, and active select committees. The insights gleaned from this book are also readily applicable elsewhere.

One of the underlying themes of We, the People(s)—and the reason for the ‘s’ in the title—is the participation of sub-state groups as collectives in governance, such as indigenous peoples and other non-dominant groups.

We, the People(s) can be purchased from Victoria University Press.

What’s the Hurry? Urgency in the New Zealand Legislative Process 1987–2010 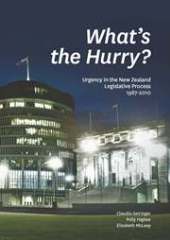 For more than a century, New Zealand governments have periodically put the House of Representatives into “urgency”. As its name suggests, urgency is a device by which legislation can be passed in a hurry if there is a genuine need to do so. But it also serves a more generic function.

Urgency is used to extend the House’s sitting hours from time to time, so that the government of the day can get more done during its term in office than it would otherwise have time to. In short, urgency is a technique for prioritising government business in the House over other activities that we expect MPs to perform (both inside and outside Parliament).

What’s the Hurry is the first in depth study of the use of urgency in New Zealand. The authors document every use of urgency over a 24 year period (1987–2010) and analyse how, when, how much, and why urgency is used. They conclude that, while some uses of urgency are relatively un-problematic, others are deeply troubling—particularly when urgency is used to avoid select committee scrutiny of legislation.

What’s the Hurry can be purchased from Victoria University Press. It can also be accessed electronically as a PDF pdf1.3MB 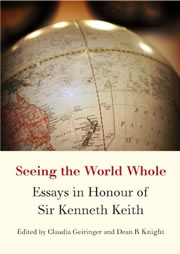 The Rt Hon Judge Sir Kenneth Keith ONZ KBE QC is one of New Zealand’s most eminent jurists. This collection of essays—based on contributions to a conference in 2007—marks his retirement from the New Zealand Supreme Court, honours his distinguished career as academic, law reformer, legal advisor, international advocate, and judge, and celebrates his appointment as a permanent judge of the International Court of Justice—the first and only New Zealander ever to be so appointed.

In these essays, leading judges, scholars, and practitioners reflect on Sir Kenneth’s contribution to the law and advance dialogue on a range of areas of legal policy and practice of particular interest to Sir Kenneth.

The essays reflect, in particular, Sir Kenneth’s preoccupation with the connections that underlie the legal universe—between the local and the international, the past and the present, the practical and the theoretical; between law and policy, law and history, law and literature; between the varying sources that underlie the law and legal reasoning, and between the varying professional roles that may constitute a legal career.

Copies are available from:

Māori Property in the Foreshore and Seabed: The Last Frontier

This issues paper was commissioned from the New Zealand Centre for Public Law by the Human Rights Commission. It aims to to promote discussion about the implications of taking a rights-based approach to social policy-making, with a particular emphasis on the implications of economic, social, and cultural rights.

The Tie that Binds: The Relationship between Ministers and Chief Executives

This book explores these questions, reporting and drawing on discussions organised by the Institute of Policy Studies and Centre for Public Law. The discussions, held in late 2001, were funded by the State Services Commission, the Treasury, and the Department of Prime Minister and Cabinet. There was a wide diversity of views expressed at these forums.

This suggests we may be at a turning point. We may still be able to stretch traditional concepts to explain and characterise the relationship between ministers and departmental chief exectutives. But these explanations are increasingly unconvincing in some aspects of the relationship and perhaps in the future to the the entire relationship itself. If the latter is the case, it is time to start reformulating theory, norms, and practices in this area.

Copies of this publication are available at a cost of NZ$25 including GST (plus $10.00 for international delivery) from:

Property and the Constitution

In this set of essays, public lawyers, property lawyers, and legal philosophers examine the public dimensions of private property. Today governments across the globe are privatising formerly public property, the public forum is being replaced by the privately owned shopping mall, and an increasing range of interests are being described as ‘property’. In this milieu, an examination of the powers which attach to ownership becomes all the more pressing.

The contributors consider whether property is a human right, its role in making responsible citizens, its relationship to freedom of speech and other values, the proper scope of constitutional protections of private property, impediments to the redistribution of property, and attempts to redress historical wrongs by property settlements to indigenous people. Taking a richly comparative perspective, examples have been drawn from jurisdictions as diverse as the United Kingdom, South Africa, Germany, the United States, and New Zealand.

Copies of this book are available from Hart Publishing.

Roles and Perspectives in the Law: Essays in Honour of Sir Ivor Richardson

This collection of essays constitutes the result of the conference to honour Sir Ivor Richardson on his retirement as President of the Court of Appeal. The conference, entitled ‘Roles and Perspectives in the Law’, was held in April 2002 by the New Zealand Centre for Public Law. These papers were presented at the conference or are papers written specifically in light of that conference, in honour of Sir Ivor.