Te Herenga Waka—Victoria University of Wellington, Te Tira Pūoro o Aotearoa—New Zealand Symphony Orchestra (NZSO), and the Wellington City Council (the Council) have revealed further details for the fit-out of a national music centre in the heart of the capital.

On Tuesday 8 March, the University, NZSO and the Council revealed the progress being made in their plans to transform Te Ngākau Civic Precinct into a vibrant centre for musical and creative excellence.

The commitment between the University and NZSO will see the national music centre occupy space in the Michael Fowler Centre precinct, formed by the new landmark building being developed by Willis Bond at 110 Jervois Quay, and the redeveloped Wellington Town Hall.

To mark this next stage in development, new images were shown to donors and stakeholders at an event in Wellington, where details for the suite of facilities that will comprise the national music centre were described to attendees in detail.

The University and the NZSO are excited to work with Willis Bond on plans to locate the University’s New Zealand School of Music—Te Kōkī (NZSM) and the NZSO within 110 Jervois Quay. The current intention and plan would see NZSM occupying part of the ground floor—which will be a public-facing space to celebrate music—as well as all of level one and part of level two, where modern offices and state-of-the-art teaching spaces will be used by NZSM academic and administrative staff.

The NZSO will also occupy part of level two as its administrative base, where it will have sound-proofed practice rooms and ensemble rooms for its musicians.

The redeveloped, much-loved Wellington Town Hall, with its wonderful auditorium and world-class acoustics, will be at the heart of the national music centre. NZSM, the NZSO, and the Council’s civic activities will co-locate across the building.

Professor Jennifer Windsor, Acting Vice-Chancellor of Te Herenga Waka—Victoria University of Wellington, says: “This latest milestone in our progress towards a national music centre is significant. At 110 Jervois Quay, we plan to provide our music students and staff with a dynamic and purpose-built space that will spark their creativity. Sharing the national music centre with the NZSO in the heart of Wellington will mean our students can work alongside professional musicians, form other industry connections, and have one of the best musical educations in the world.”

The NZSO will build state-of-the-art audio recording facilities and control rooms in the basement of the Wellington Town Hall, creating a complete in-house package of recording and mixing capability to rival established studios throughout the world. Box-in-box construction will ensure the studio spaces are acoustically isolated providing the highest level of recording facilities available.

“Once completed, the NZSO will be able to record to the highest standard, especially film soundtracks. We have a proud history of recording for film, including Hollywood blockbusters. Our aim is to play on many more films and the new facilities will enable us to do so,” Mr Biggs says.

On the ground floor, the Adam Auditorium, named in recognition of the Adam Foundation’s founding gift, will house the magnificent Edwardian pipe organ, which is being fully restored. Seating up to 1500 people, it will include foyer and audience spaces, a green room, recording, and backstage facilities.

The ground floor will also feature the T.G. Macarthy Grand Entrance and Staircase, Wellington Community Trust Suites, and the Christopher Parkin Hall, which will contain an artwork to be commissioned and gifted to Wellington by Mr Parkin. 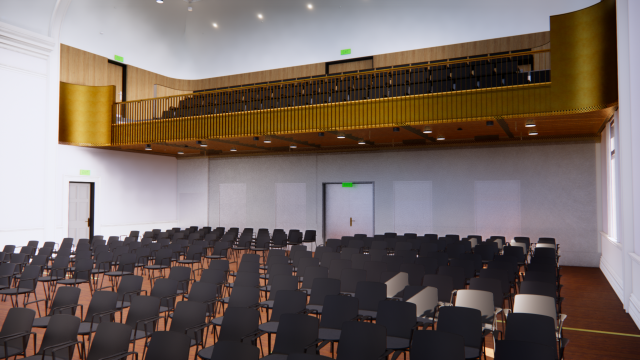 On the first floor, the Debating Chamber, seating up to 250 people, will be an important public performance space for NZSM students and staff, as well as performers brought in by the NZSM and external hirers. The Debating Chamber (pictured right) will continue to be used for Wellington City Council meetings and civic ceremonies.

On the second floor, a multipurpose space known as Classroom 2, with capacity to seat 200 people, will be a contemporary space with variable acoustics that can be adapted for classical rehearsal, composition, music therapy, and sonic arts.

Over the past few years, the University and the NZSO have embarked on a $30 million fundraising campaign to enable the fit-out of this new national music centre. Now, building on substantial support from the community, the partners would like to invite the public to ‘Take a Seat’ in the redeveloped Wellington Town Hall. This next phase of the campaign provides donors with the opportunity to support this transformative project and have their donation recognised by a named plaque on a seat in the Wellington Town Hall.

“Taking up the offer to ‘Take a Seat’ in the Town Hall will put you front and centre as together we bring this state-of-the-art learning, recording, and events venue to life in the heart of the cultural capital.”

“To make a donation or find out more, go to https://www.wgtn.ac.nz/creative-quarter/support and select ‘Take a Seat’.

The new development will begin in late 2022. The NZSM anticipates it will open its teaching spaces to students in Trimester 1 2026 and the NZSO will occupy the space from January 2026. The Wellington Town Hall remains on track to open in 2024.