Wai-te-ata Press has a long-running commitment to both poetry and innovative printing and publishing. Extending that tradition is The Wai-te-ata Companion to Poetry, a collection that presents poetry in formats that are physically and typographically adventurous. Paul Thompson, key instigator of the Companion, shows further progressive presentation in Poem: Waikanae River. 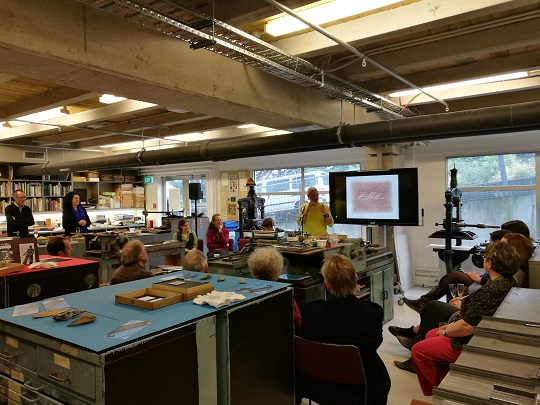 Press Director, Sydney Shep welcomed guests with words drawn from Canadian poet Robert Bringhurst, who describes typography in well designed books as dancing on the page. Shep then handed the podium to French to introduce the Companion. French spoke of the delight she felt at opening the box and discovering the unique forms of each of the eleven poems. The impact of Alan Ginsberg's "Howl" is visually conveyed by the density of white text on black background in a folded concertina book with maps on the covers. The elegance and simplicity of Elizabeth Smither's "A cortege of daughters" is evident in the letterpress impression of the poem on black-bordered Victorian mourning paper tied with a black ribbon. French's own poem "Parallel universes" reads as a spiral around a tube like a telescope, which slides to reveal nebulous galaxies beneath. Each object is a physical instantiation of the words and language of the poem, in which the type dances off the page to take a different and unusual forms.

Paul Thompson then described the conception of Poem: Waikanae River. Its scroll-like form reinforces its content in a bibliographically intriguing way as the sinuous text twists and swirls to trace the river's journey from source to sea. Thompson also clarified the structure of the Companion as representative of the history of Western poetry, from the English romantic Shelley, through American modernist William Carlos Williams and contemporary New Zealand poets Alistair Te Ariki Campbell, Smithers and French. To the amusement and amazement of the audience, Thompson then read a short poem composed of lines from the poems included in the Companion.

The launch followed in the wake of two previous successful collaborations between the Press, poet Thompson and award-winning paper engineer Glenna Matcham, titled 7.34 and The Colour of Water. Matcham at Jumbletree has done most of the handwork - binding, gluing, cutting, crafting - on these creative collaborations. 7.34 by Thompson literally unfolds the Muses' transformation of the morning commute from a journey of repetition and conformity into a creative adventure. Its intriguing accordion structure is cased in Metlink train timetables and tickets. The Colour of Water, designed by Shep, similarly combines digital print technologies with extensive handwork and inventive carousel structures. It was a finalist in the Australian Manly Book Awards in 2014.

Thompson doubles as Head of Content, Deputy Director, at Museums Wellington and has exhibited multiple artist's books at Solander Gallery. Matcham's intricate sculptures have also been displayed around Wellington, such as the paper herbarium placed at the entrance of the Botanic Gardens, January 2016.

The Wai-te-ata Companion to Poetry is available from the Press in a numbered edition of 15 at $250 each. Orders to: wtapress@vuw.ac.nz

A numbered edition of 20 "Poem; Waikanae River" is available at $125 from Museum Photon Press: museumphoton@clear.net.nz or from Solander gallery: info@solandergallery.co.nz