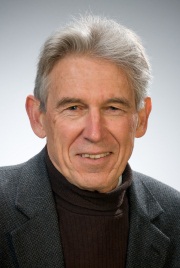 Professor Peter Barrett from Victoria University has been recognised by the world’s oldest geological society for his work on Antarctica’s climate history and appreciating its global significance.

The Victoria Professor has been made an Honorary Fellow of the prestigious Geological Society of London—an honour currently held by only 70 geoscientists worldwide.

As a PhD student in the 1960s, Professor Barrett discovered the first remains of a four-footed animal in the Transantarctic Mountains—supporting the then controversial theory of continental drift. Since then, his curiosity and passion for Antarctica’s geological past has led him from studying strata in the Transantarctic Mountains to drilling off the Antarctic coast for climate and ice sheet history.

“The Fellowship is a truly significant honour. I am particularly pleased to be associated with the society for its recent statement on climate change. I certainly share their view that it is “...a defining issue of our time, whose full understanding needs geology's long perspective,” says Professor Barrett.

Professor Barrett was Founding Director of the Antarctic Research Centre (1973-2007) and is currently Deputy Director of the New Zealand Climate Change Research Institute at Victoria University.

“We have done well over the years at Victoria in attracting great staff and students, and have benefited greatly through working with colleagues both locally and overseas. We’ll continue to test and advance our science, but we are increasingly aware of the need to ensure the public appreciates our deep concern over climate change.”

Professor Barrett has led over 20 expeditions to Antarctica, including a number for offshore drilling for climate history. He still advises on Antarctic projects involving both sediment and ice coring. He has a continuing interest in Earth’s climate history over the last 100 million years, as well as the coming century.