Find out about recent major publications from staff in the Political Science and International Relations programme. 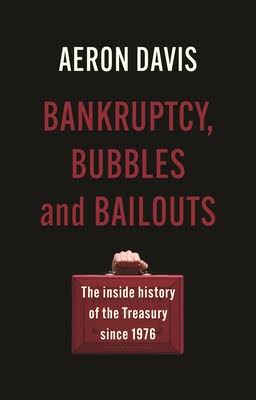 The Treasury is one of Britain’s oldest, most powerful and secretive institutions, one that has played a central role in shaping the country’s economic system. But all too often it has escaped public scrutiny when it comes to investigating the ups and downs of the UK economy.

Its public image is one of stability in times of crisis, repeatedly rescuing the nation’s finances from the hands of posturing politicians and the combustions of world financial markets. However, there is another side to the story. In between the highs there have been many lows, from botched privatisations to dubious private finance initiatives, from failing to spot the great financial crisis to facilitating austerity and ever-growing inequalities.

Davis takes the reader behind the scenes to offer an inside history of the Treasury, in the words of the chancellors, advisors and civil servants themselves. Bankruptcy, bubbles and bailouts shows the shortcomings as well as the successes, the personalities, ideas and conflicts that have shaped Britain’s economy since the mid-1970s. Based on interviews with over fifty key figures, it offers a fascinating, alternative insight on how and why the UK economy came to function as it does today, and why reform is long overdue.

This book presents a socio-legal enquiry into the civic marginalisation of Roma in Europe. Instead of looking only at Roma's position as migrants, an ethnic minority or a socio-economically disadvantage group, it considers them as European citizens, questioning why they are typically used to describe exceptionalities of citizenship in developed liberal democracies rather than as evidence for how problematic the conceptualisation of citizenship is at its core. Developing novel theoretical concepts, such as the fringes of citizenship and the invisible edges of citizenship, the book investigates a variety of topics around citizenship, including migration and free movement, statelessness and school segregation, as well as how marginalised minorities respond to such predicaments. It argues that while Roma are unique as a minority, the treatment that marginalises them is not. This is demonstrated by comparing their position to that of other marginalised minorities around the globe.

2020 was a year unlike any other. Still in her first term as prime minister, Jacinda Ardern found herself facing her biggest challenge yet – protecting New Zealanders against a worldwide pandemic. By year’s end New Zealand had kept its nerve, protected its borders, and for the most part kept its residents alive and well. In the midst of all this an election was held.

Politics in a Pandemic provides a deeper understanding of what happened during the election, which was held in the most difficult circumstances facing New Zealand since the Second World War.

It includes contributions from the New Zealander of the Year, Jacinda Ardern, and the Wellingtonian of the Year, epidemiologist Professor Michael Baker, as well as the National Party’s Judith Collins, Greens’ co-leaders James Shaw and Marama Davidson, ACT’s leader David Seymour, the Minister for Covid-19 Response Chris Hipkins, and award-winning journalists Tova O’Brien and Henry Cooke, along with many other reporters, pollsters and academics, together providing 35 perspectives on the election. Personal reflections are complemented by UMR survey results, first-hand campaign accounts, the perspectives of overseas observers, and analysis of everything from political cartoons and billboards to leaders debates, political party funding, policy and populism. It covers the departure of New Zealand First, the return of the Māori Party, nationwide referendums on euthanasia and the legalisation of cannabis, and the Christchurch mosque attacks. But ultimately, the 2020 election was a referendum on Jacinda Ardern’s leadership in a time of pandemic. This book explains why she won and what this might mean for the country’s future.

Politics in a Pandemic is the twelfth in a series of election books going back to 1987 – including The Baubles of Office (2007), Kicking the Tyres (2012), and Stardust and Substance (2018) – essential for anyone interested in New Zealand’s government and politics.

The “spectre of populism” might be an apt description for what is happening in different parts of the world, but does it apply to New Zealand? Immediately after New Zealand’s 2017 general election, populist party New Zealand First gained a pivotal role in a coalition with the Labour Party, leading some international observers to suggest it represented a populist capture of the government. The leader of New Zealand First, Winston Peters, justified his support for Labour as necessary to allow capitalism to “regain… its human face”. The new prime minister, Jacinda Ardern, spoke of a kinder, more inclusive politics.

This book draws on the 2017 New Zealand Election Study to uncover New Zealanders’ political attitudes and preferences post-election. Its authors ask: is New Zealand now a populist exception? Through detailed empirical analyses of how populism and authoritarianism affected vote choice, opinions about immigration, satisfaction with democracy, and the relevance of gender and indigeneity to these issues, this book finds that New Zealand politics today does not reflect the international trend toward ideological polarisation and electoral volatility.

The authors argue that inclusive forms of populism can be pluralist if a leader’s rhetorical approach recognises “the people” as diverse and encompassing. A Populist Exception? concludes that although populism has long been a strong current in New Zealand history, contemporary New Zealand exhibits a moderate form of populism, with liberal and pluralist values in balance with a strong commitment to majoritarian democracy.

In the 20th century, South Korea was usually seen as a “shrimp amongst whales”, a minor player with limited agency in regional and global affairs. Korea’s risen status as a “middle power” today, however, raises the question about related changes in the South Korean identity or “sense of self” in the world.

In the case of peacekeeping and climate diplomacy, South Korea’s identity as an international actor has been dominated by practices of self-identification that position the country at the brink of advanced countries, aspiring to lead the rest of the world but with the overall objective to maintain national autonomy in a changing regional and global context.

Find out more about this book.

East Asia’s rapidly changing role in international security, the global economy, development, and global governance are expertly accounted for in this much-needed, state-of-the-art text. Xiaoming Huang offers an engaging and informed account of the key concepts, issues, and actors working in this area. Ranging from the region’s history to culture and a comparative assessment of the region’s states, this text is informed throughout by a compelling theoretical framework.

In so doing, it unpicks the often complex relationships both at the domestic level and externally. Only with this understanding is it possible to make sense of the region’s complex relationships both internally and externally. Structured around key concepts in international relations of war and peace, economic development, and increased contemporary security threats, this text offers an empirically-rich, engaging account of the changing fortunes of East Asia.

Find out more about this book.