Samoan Studies lecturer Le'ausālilō Lupematasila Fata 'Au'afa Dr Sadat Muaiava has been expanding his teaching beyond the halls of Kelburn to the rugby field.

Currently, 14 of the 38 contracted players identify as Samoan but many are New Zealand-born and have differing levels of connection to and knowledge of gagana and culture.

“Players were organised into three different language levels,” explains Dr Muaiava. “Their confidence in the language and culture grew each workshop. Players who were already fluent speakers became mentors and their leadership skills were evident as they helped each other learn.”

Aside from the lessons, the players and Dr Muaiava used a WhatsApp group to communicate and practice. The players began to use Samoan in conversations, and were eager to use it to introduce themselves, and to respond to other players, family, and coaches. 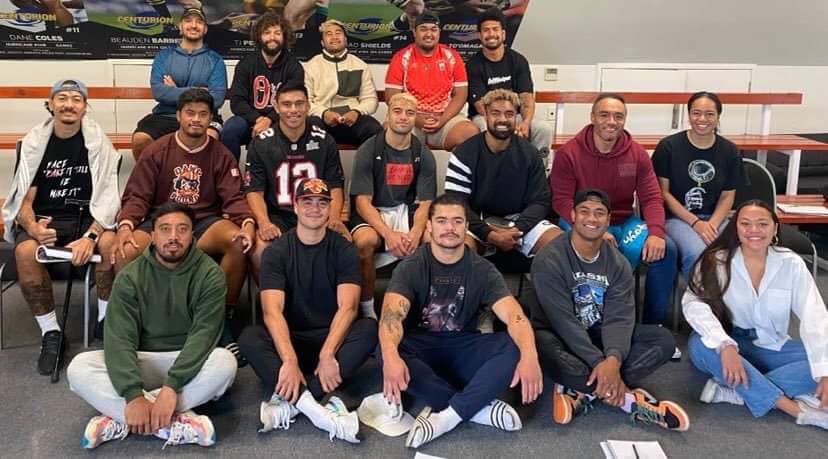 “Samoan lessons have helped me to reconnect with my culture and have given me a fresh appreciation for the language and culture. Taking up the lessons has made me feel proud of where I come from and encouraged to learn more,” says player Pepesana Patafilo (Hurricane #280).

The reconnection and connection to their homeland that the programme offered the players was a highlight for Dr Muaiava. “Language is important for inter-generational communication and it is really important today for Samoan youths to be able to communicate with relatives and each other. So, to be able to help the players on their own language and culture journeys was very rewarding,” he says.

“Our language and culture are part of who we are, so to embrace and display their culture and language is them telling the world where they are from and that they are proud Samoans,” says Dr Muaiava. Indeed, since starting the lessons, Hurricanes captain Ardie Savea has begun including gagana in his post-match interviews.

Hurricanes CEO Avan Lee says: “In 2021, we have made a conscious effort to be more culturally aware. A significant percentage of our players are of Māori or Pasifika heritage. We are delighted that our Samoan players have invested in themselves by learning more about their language and culture. The players are growing together and as individuals, which is fantastic, and I’m confident the guys will improve the Hurricanes organisation as a result.”